I had a sneaky weigh-in this morning and I’ve lost 2Ib. This is great news..especially as I had a small glass of wine yesterday!

I had a wedge of fridge omlette  and a slice of organic rye and spelt bread toast for breakfast this morning, it was lovely. I am off to meet a friend for lunch so not sure how that’s going to turn out. 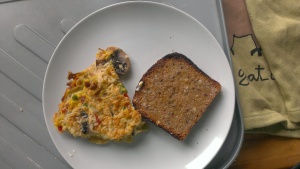 I was in the kitchen until 9pm cooking biscotti last night. They turned out rather well. I follow a basic recipe but change it to include some protein powder and often replace the sugar with a lower glycemic index product, like Agarve nectar or fruit sugar- which is 3x sweeter than normal sugar and much lower in carbs.

50g fruit sugar(all I had left)

I cut mine into 30 biscuits which would make them 70calories each with 2g protein, 1g fat and 15g carbs. They will keep for about a week but I usually freeze half unless my friends get their hands on them!

I have also been known to use mixed seeds, coconut and ground almond in place of some of the flour. Have Fun!